The Library’s conservation internship programme started in 2005 and is generously funded by the Library’s Contributing Members and the Heritage Council. The programme has proved to be invaluable for both the Library and participating interns as Jessica Baldwin, Head of Collections and Conservation told us:

‘For the students it has offered a unique opportunity to develop practical skills while continuing their technical training as time is provided to explore new ideas and research. For recent graduates it also provides first-hand experience of working within a busy museum environment, which is essential to their career development.

Conversely working with the interns has also provided a great opportunity for the Library’s conservators to continue their professional development. The supervision and training of recent graduates has offered the impetus for extensive discussion on treatment approaches; this has resulted in the development or refinement of conservation practices within the Library. From a practical point of view the interns have had a very significant impact on not only the individual objects that they treat, but also the Collections as a whole, through their involvement in every aspect of work carried out in the busy Conservation Department.

On a personal level it has been an absolute pleasure to meet and work with so many talented, bright conservators and to be able to follow their careers as they go from strength to strength – not to mention making so many wonderful friends.’

The Library is delighted to be able to celebrate the tenth anniversary by inviting intern applications for 2015. If you are interested in joining the CBL conservation team then further information and details on how to apply are available to download here.

To mark the occasion, we have also invited our previous interns to introduce themselves and give an update on what they’ve been up to since leaving the Chester Beatty. Click here to read more.

I was delighted to get the opportunity to attend this three-day workshop organised by the Institute of Conservator-Restorers in Ireland (ICRI) and generously supported by the Heritage Council. This practical workshop was hosted by the National Library of Ireland (20-22 April 2015) and taught by Japanese paper conservator, Namiko Tagawa. The six participants each had the opportunity to construct a 60 x 90 cm Karibari board, which is traditionally used in Japanese conservation to slow and control the drying rate of newly lined artefacts and scrolls under tension.

On the first morning, we were all eager to start; Namiko was really enthusiastic and pragmatic so we got going straight away. The class started with a short introduction to the Karibari core which is made of cedar wood; it is lightweight (essential when making large boards) and has a pleasant smell which is naturally repellent to insect and mould attack. The lattice structure is secured with bamboo nails and is extended to form little legs at the top and bottom of the frame. Our Karibari frames were pre-made by the Masumi Corporation a Japanese material supplier.

Traditionally, eight layers of paper are applied to the cedar wood frame to construct a Karibari board. However, due to the limited time available for our class we only had time to apply five. Namiko carefully selected the most important layers and excluded the three layers which are more important when making a sliding door. Namiko explained how the paper is selected to prepare the board; a variety of papers can be used for each layer such as Shekishu-shi or Minogami as long as the increase in weight of the paper for each layer is respected. For this workshop we used a Hosokawa-shi paper (100% domestic Kozo cooked in soda ash, unbleached and stainless steel dried) in 12, 16, 20 and 24 gram weights.

On day one we applied the first and second layers to our Karibari. The first layer, honeshibari, prevents any warping or distortion to the wooden frame. The wheat starch paste must be thick and tacky and was applied directly to the wood and left to soak in for a few minutes. A second layer of paste was then applied before a full sheet of 12gsm dry paper was laid over the wooden core and smoothed down with a nadebake or smoothing brush with slightly damp bristles. The edges were trimmed with a straight edge while the paper was still slightly wet, which is the Tokyo style of karibari making; while in Kyoto the paper is left larger and folded around the sides of the karibari frame. Throughout the workshop it was interesting to learn about the difference in techniques used by conservators traditionally trained in Tokyo and Kyoto. 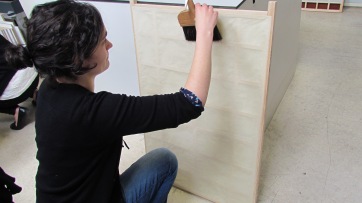 After the first layer is applied, the board is turned over and the same process carried out to the second side. It was interesting to note that both layers needed to be applied one after the other, with no drying time in between; this prevents distortion of the frame. The second layer, dōbari, tightens the frame further. Dō means ‘rib’ and bari means ‘to apply’ so the idea of the second layer is to apply a ribcage-like structure to strengthen the board. A full sheet of paper cut a little smaller than the first layer was fully pasted out with a thinner wheat starch paste. with assistance, the frame was held vertically with the top edge tilted forward. The pasted sheet of paper was held to the top corners of the frame before the board was tilted back allowing the sheet of paper to lie down naturally onto the board. The paper was then smoothed down before the action was repeated on the other side. 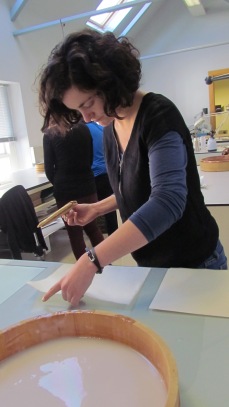 On the second day we cut away the four legs of the frame and applied the third and fourth paper layers to the frame. The shitafukuro and uwafukuro form pockets –fukuro– which prevent distortion caused by the tension of the uwabari, the fifth layer.

The shitafukuro was prepared by cutting a sheet of paper in to eighths. Namiko showed us how to square a sheet of paper and cut straight edges using traditional techniques. At this stage only the edges of the paper are attached to the board. Each piece was applied to overlap the one next to it by about 2.5 cm. The pieces for the uwafukuro layer were water cut all around and applied in the same way as shitafukuro to both sides of the board. However, the shitafukuro pieces were offset with the layer below to give a brick-work effect and the overlap on this layer was only about 1 cm. This careful staggering of the paper overlap in the shitafukuro and uwafukuro avoids a build-up of paper which would create an uneven surface.

On the morning of the third day we applied the last layer of paper to our board. The uwabari is a full lining over the entire surface of the board and was adhered with a layer of very thin paste. To ease the application of this lining, the paper was placed on to a large sheet of release paper before it was pasted out. In contrast to the application of all of the other layers, the board was then carefully placed on top of the pasted paper before being turned over to allow for smoothing of the sheet with the nadebake. Finally, the release paper was peeled off, the lining smoothed down once more, and the edges folded onto the edges of the frame. Once both sides were lined, we cut strips of paper to cover the edges of the frame and applied them to the board to finish it.

In the afternoon Namiko explained how to finish the board with several applications of fermented persimmon juice (shibu) from the kaki fruit. The high tannin content of the persimmon juice oxidises to give the karibari board its distinctive dark brown-red colour, whilst also waterproofing it. A minimum of four coats are required, but more may be necessary to achieve the desired colour. A brush with no metal must be used and ideally the brushing should be done on a bright day to allow the coating to dry quickly without sinking in to the paper too much. Shibu has a strong, distinctive, and quite unpleasant smell, so it is best to apply it outdoors if possible! On this note, we set off to an improvised work space where the sun was shining for Namiko’s demonstration. To dry, the board must stand in the sun for a while before it is turned over and after a little less than an hour a second coat could be applied. The weather was really blissful! 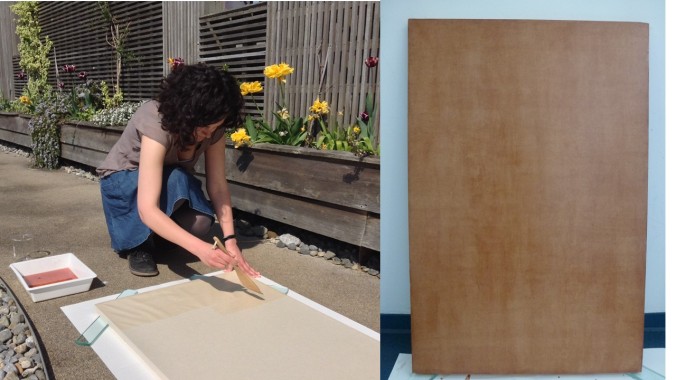 Working with shibu in the sunshine! CBL’s finished Karibari after nine applications of Persimmon juice.

Back at the Chester Beatty the following day I set myself the task of applying the first few waterproofing coats of shibu to our own karibari board. The weather was still warm and sunny so I decided to make the most of our roof garden! The first solution of persimmon juice was 1 part persimmon: 2 parts water and Puneeta, Kristine and I took turns to apply the careful stripes. The sun was so strong that within 45 minutes of drying and board rotation we could apply the second coat (1 persimmon: 1 water). The next day we applied the third layer (1 persimmon: ½ water), a concentration that was used for each of the additional layers. In the following weeks a further six layers of shibu were applied to the board. The karibari now has to be allowed to dry fully over two or three months before it can be used.

I would like to thank Louise O’Connor, ICRI member and Conservator at the National Library for taking the initiative to invite Namiko to Dublin after her participation at the ICON Adapt and Evolve conference in London in April 2015. All participants were delighted with Namiko’s expertise and enthusiasm, and look forward to using their karibari boards in the not too distant future.

There was an error retrieving images from Instagram. An attempt will be remade in a few minutes.