A selection of forty prints from the Chester Beatty collection have just gone on display in Belfast as part of an in-focus exhibition, Francisco Goya: The Disasters of War, at the Ulster Museum.

In September I started work on the preparation of this iconic series of prints. The Chester Beatty holds a complete Second Edition of The Disasters of War (Los Desastres de la Guerra) by Francisco de Goya (1746-1828). Formed of eighty aquatint prints, the series was first produced around 1820 and later printed in Madrid in 1892.

The prints were originally kept as a bound album. However, at some point in the past century the prints were removed from this format and mounted individually in window mounts for display. As the mounts were slightly too small for the prints, they had come in contact with the gummed linen tape used to assemble the mounts and in a number of cases the prints had adhered to the mount board, probably as a result of excess moisture applied during mounting. Apart from this, the paper support and media were in good condition, with only slight planar distortion in the printing plate area.

Print before treatment: The mount is too small, and the object is in contact with the gummed hinge tape; During conservation: Lifting a print which was adhered to the gummed tape and the mount board.

Elisabeth Randell, a student in Paper Conservation at Camberwell College of Arts in London, started the conservation treatment of these objects during her summer placement with us. First, Elisabeth removed the prints from their unsuitable mounts, before gently surface cleaning them using chemical sponge and erasers as necessary. Old hinges were then removed using locally applied moisture. Edge tears were repaired as necessary using Japanese tissue and wheat starch paste.

I continued the preparation of the prints by adhering new Japanese paper hinges to the upper edge of the folios using wheat starch paste. New conservation-standard window mounts were then prepared, and the prints were carefully secured in the mounts using Japanese paper T-hinges. This allows the prints to be turned so that the verso can be viewed without incurring any damage. 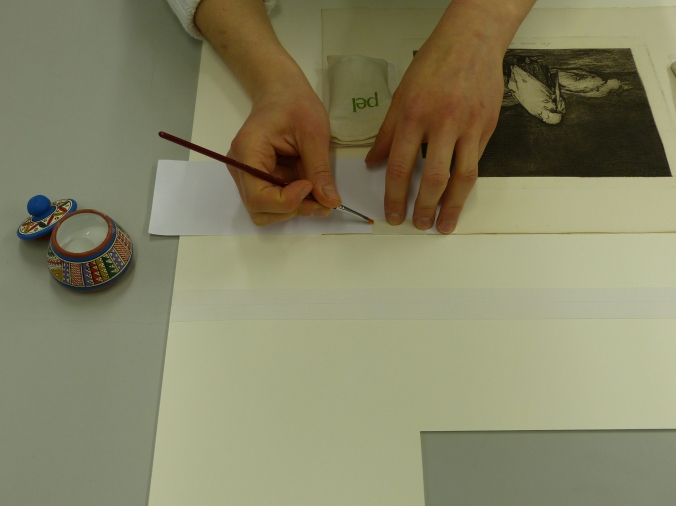 During my work on the prints, I was also assisted by Adam Macklin, a student in Book and Paper Conservation at the University of Amsterdam, who volunteered at the Chester Beatty Library for one week. Adam’s help was invaluable at each step of the mounting process, and ensured the work was completed on time.

After conservation: a conserved and mounted print, ready for exhibition. During conservation: Adam working on securing the prints in their new mount.

Finally, I assisted with the packing of the objects for travel. This included the preparation of six conservation-grade phase-boxes, the proper wrapping of the objects, and finally packing the crate for safe transport. The 40 prints to be exhibited were then transferred to the Ulster Museum, where they were framed by Conservator Gillian O’Neill and her team. Once framed, Julia Poirier and I travelled to Belfast to oversee the installation of the prints in the Ulster Museum’s print gallery. 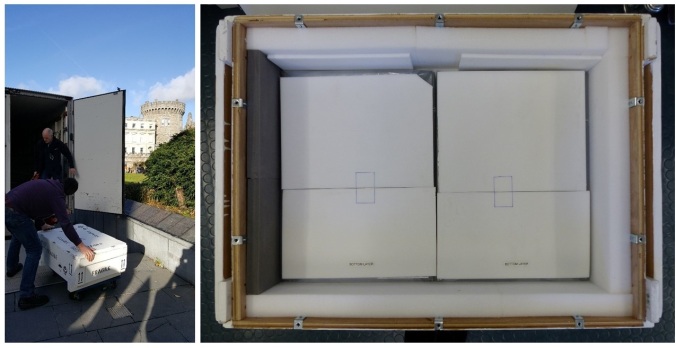 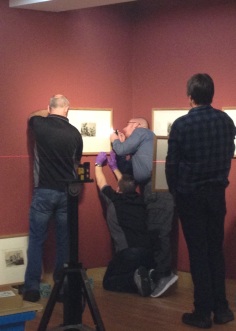 Installation at the Ulster Museum.

Thanks to this amazing project, I now have a much better understanding of the complete loan process in an institution. Working with different stakeholders was highly enriching, and taking part in the installation of the exhibition in at the Ulster Museum in Belfast was a great reward.