The conservation of the Cihan-numa (Mirror of the World) by Haci Halife formed the main project during my Heritage Council internship in Conservation. The project was generously supported by the Turkish Cultural Foundation (TCF), and has enabled the volume to be rebound in a sympathetic Islamic style binding that will allow the book to be safely handled and displayed.

Printed by Ibrahim Muteferrika in Constantinople in 1732, this book is one of the first books printed in Turkish in Turkey. The book first came into the lab in 2016 because an image of one of the maps was needed for inclusion in ‘The Director’s Choice’ publication. However as the book was housed in an unsympathetic rebinding, in-situ digitisation was not possible. The decision was made to separate the print from the textblock in order to facilitate digitisation. In case you missed the first part of my journey with this object please follow this link, if you’d like, before continuing reading below.

After fully disbinding the textblock, as described in my previous post on this object, the next step was to carry out paper repair of the folios. The repair necessary was quite substantial due to the sawn in recesses along the spine and unsuitable previous repairs. The paper repairs were done on a lightbox with Japanese paper and very dry wheat starch paste to prevent water staining; coloured areas and those with copper corrosion were repaired with remoistenable tissue.

Tracing the shape of the repair onto the Japanese paper and placing the repair along the fold of the folio.

After finishing the paper repairs on the Cihan-numa, the few quires that were not single bifolios were tacketed with a sewing thread at head and tail to prevent the inner folios from slipping out of the quires.

After tacketing, the spinefolds of the folios were pressed locally to reduce the swell added in this area by the paper repairs. Two narrow pieces of strong Tschudi Eterno board were cut and sanded to remove hard edges. The board strips were then attached to wooden boards, allowing pressure to be applied in this narrow area.

The localised pressing considerably reduced the swell caused by the paper repairs. However, when putting the quires back together to form a textblock, it became clear that the swell needed to be reduced even further. The quires needed time and localised weight in order to settle. After about a week of sitting under a board and being weighed-down along the back of the textblock, the quires had settled enough to start the process of sewing. The textblock was resewn with a link-stitch on four stations, located at points identified during the repair and documentation process.

To accommodate the bulk added to the back of the textblock through the paper repairs, the sewing was carried out ‘two-on.’ This means that the sewing thread does not pass through every quire evenly, but that the sewing passes between two quires as it moves from one end of the spine to the other. The first and last two quires are sewn throughout—or ‘all-along’—because although the two-on sewing reduces the amount of swell added by the thread, it is also not quite as strong as sewing all along. The addition of a spine lining and endbands further strengthens the two-on sewing structure.

Sewing the textblock (left), and consolidating the sewn quires with a bone folder (right).

Due to the heavily rounded-and-backed previous binding style, the paper textblock had a strong physical memory of a substantially rounded spine profile. This is not a feature that is typical for an Islamic binding, which usually has either a flat or slightly rounded spine. Once the sewing was finished the tackets were removed. A light application of wheat starch paste was added to the spine to stabilise the textblock. The application of the wheat starch paste is the first step toward setting the profile of the spine in a more appropriate shape.

The rest of the binding was informed by my colleague, Kristine Rose-Beers’ research with Ana Beny on the historic Andalucían binding, as an inspiration for the conservation of historic Islamic material. This binding style is characterised by an underlying textile and paper spine lining, which forms the fundamental attachment between boards and the textblock. The spine lining used for the rebinding of the Cihan-numa is a modified version of the historic examples seen in Andalucían Islamic bindings. It was constructed in the following way:

First, a woven linen textile was lined with Japanese paper. It was cut to size extending in length about 2 cm above the head and tail of the textblock and in width 5 cm on either side of the spine. The textile and paper lining was then attached to the textblock by sewing it through the last quire, with the textile facing the spine.

Cutting and folding the spine lining (left), and adding the leather core.

The spine lining, which extends over the head and tail of the textblock, was folded down to form a core for the endband. An additional traditional leather core was added to further stabilise this structure.

The primary endbands were sewn through the spine lining, further securing the attachment to the textblock Due to the large number of quires in the Cihan-numa, the primary endband was only tied down at every fourth quire of the volume.

Because endbands often look so pretty, it is sometimes forgotten that they have a very important structural role in the physics of a binding. They play an important part in supporting the sewing structure and change the opening characteristics of the textblock dramatically.

Once the endbands were sewn, the new Tschudi Eterno boards were attached to the textblock using the extended spine lining. Localised pressing of the boards in a standing press ensured that the attachment was secure. 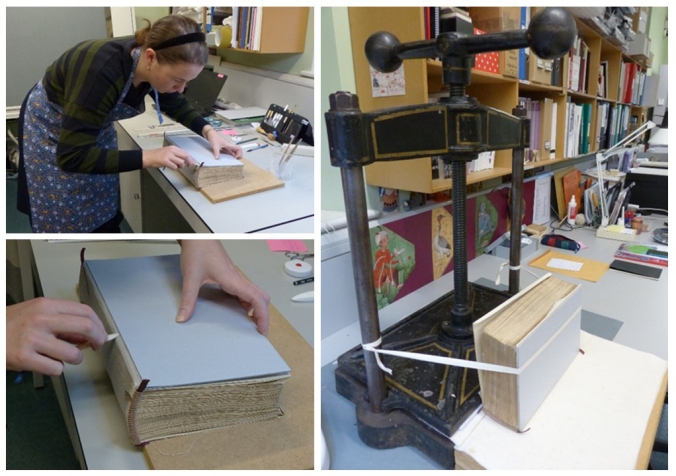 Positioning the spine lining inside the split boards and attaching the boards in the standing press.

At this stage, the book was ready for covering. I edge-pared a maroon coloured goatskin in preparation. The leather was humidified before any wheat starch paste was applied. This humidification increases the working time when covering, and makes the leather suppler while working it around the shape of the book. 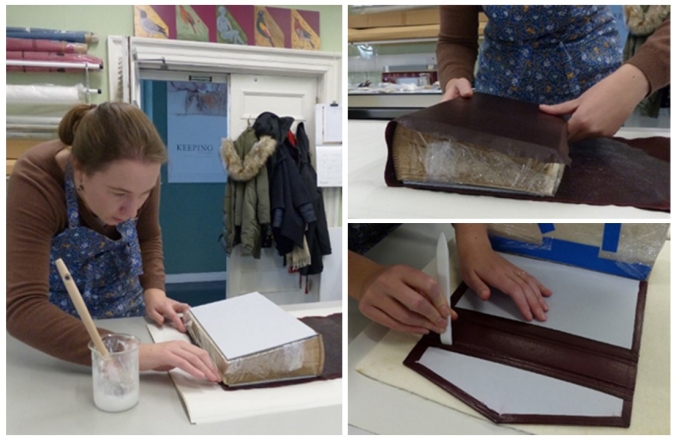 Although the previous binding of the Cihan-numa did not have an envelope flap, they are often a feature of 18th century Turkish Islamic bindings. For this reason, and in order to further protect the textblock and balance out its slight wedge-shape, the decision was made to add an envelope flap to its new binding. 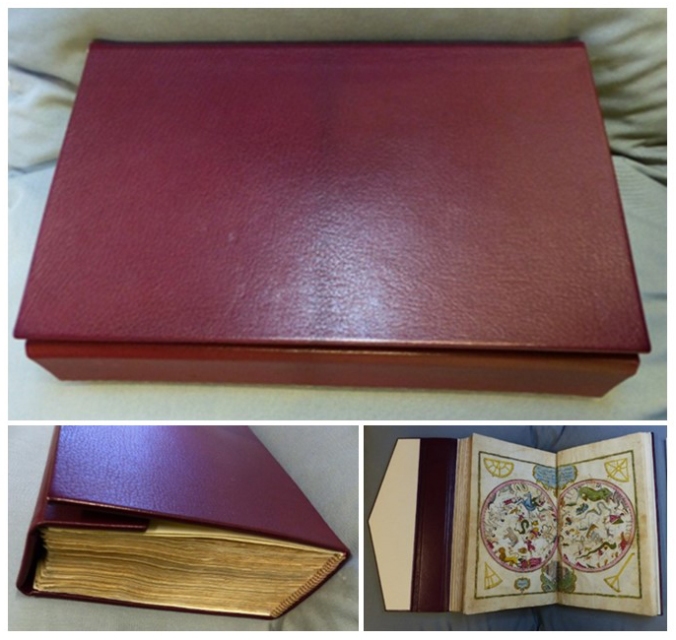 The conservation of this volume was very interesting to me, as it was my first encounter with Islamic material. The research was very exciting, albeit difficult due to the lack of information available on the subject of early Turkish printed books. Though not particularly challenging in itself, the sheer volume of the paper repairs was also quite daunting! 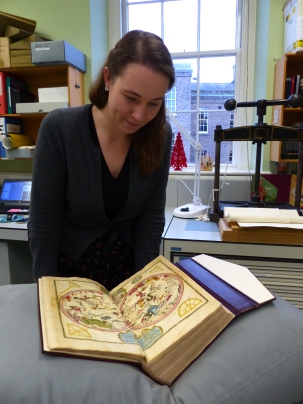 The most interesting bit of the conservation was definitely the sewing technique and the endbands, which are both so fundamentally important to the structure and the functionality of the book. It was beautiful to see the book come together again in the end, and to be able to see the difference my conservation treatment has made to the book’s opening characteristics.

Working on such a wonderful collection has many perks, and due to my work on this interesting object, I was invited by Pádraig Ó Macháin, Professor of modern Irish at University College Cork, to give a talk about my internship project as part of an afternoon seminar titled “Beyond the text: the functionality and materiality of the book”. The other speakers were John Gillis from Trinity College Dublin, Agata Dierick from the City Archive of Leuven and Daniela Iacopino and Pádraig Ó Macháin from UCC. It was a wonderful experience to be invited and to have the chance to discuss my research with a professional audience at UCC.

My internship at the Chester Beatty Library has been enriching, insightful and simply wonderful all around. I have learned so much through working together with incredibly kind and knowledgeable colleagues. A new area of objects, their preservation and conservation were opened to me and the opportunities the Library has given me throughout the year to continue my professional development have truly been exceptional.

Dorothea is now working at the Bibliotheca Augusta in Wolfenbüttel, Germany.